The microbial world shapes essentially every facet of our lives. Whether they are in the soils where our food is grown, or the lungs of a person with an infection, or at the bottom of the ocean, microbes live in diverse communities made up of multiple species all working together and impacting each other. Just like in our own neighborhoods, the geography of how a microbial community is laid out affects how those microbes live and function together.

Now, Caltech researchers have discovered that changes in local oxygen concentration have drastic impacts on whether microbial neighbors live or die in the presence of a common microbial by-product, nitric oxide (NO). The results suggest that large-scale global models, such as those of the nitrogen cycle, ought to work toward representing the fact that chemical microscale environments affect microbial behavior.

A paper describing the research appears in the journal Current Biology on October 27. The study was led by graduate student Steven Wilbert and carried out in the laboratory of Dianne Newman, Gordon M. Binder/Amgen Professor of Biology and Geobiology and executive officer for biology and biological engineering.

Nitric oxide is produced as an intermediate in the multistep process of converting nitrate (NO3-) into nitrogen gas (N2). This entire process, called denitrification, is a crucial part of biological processes across the planet. Recent research has shown that different steps in this pathway may be performed by different members of diverse microbial communities.

To examine how a microbe's local environment affects its ability to carry out the denitrification process, Wilbert used Pseudomonas aeruginosa, a bacterium studied extensively in the Newman laboratory as a model organism. Using genetic engineering techniques, Wilbert produced a strain that carried out only the first half of the denitrification pathway and another strain that executed only the second half of the pathway. Then, Wilbert studied how those two engineered bacterial strains interact under different oxygen environments. The idea was that the "first half" strain produces NO as a by-product, and the team aimed to discover how the "second half" strain would handle the NO under differing local oxygen concentrations, and how, in turn, this would affect the entire community.

The study showed that, in the absence of oxygen, the second genetically engineered strain of Pseudomonas was able to take NO produced by the first and chemically alter, or reduce, that chemical as part of the normal denitrification process. Additionally, the bacteria were able to use NO as a substrate upon which to grow. However, in an environment with higher concentrations of oxygen, NO became toxic, killing Pseudomonas strains that could not reduce the molecule.

"Oxygen tunes these microbial interactions in a dramatic way: they can either live or die because of it," says Newman. "That, in turn, affects the entire denitrification process. Models that are trying to take into account how microorganisms contribute to the nitrogen cycle therefore need to reckon with the microscopic spatial environment. It's a really important variable."

While the study revealed the specifics of how oxygen mediates cellular interactions with NO, the research also points to more general principles about a broad class of microbial by-products. NO is an example of a "redox-active metabolite," or RAM. This study provides a new way to study how RAMs' impacts on microbes are affected by their local microenvironment, which can be highly variable in space and over time.

"Microbial metabolism is like a race to pick up and drop electrons," explains Wilbert. "Essentially all of life is about this transfer of energy. RAMs, with their ability to donate or receive electrons, serve as important currency between microbial neighbors. While this can facilitate energy transfer, RAMs are sensitive to changes in local oxygen concentrations that vary in space and time. Because of our results with NO, we're convinced that oxygen is the key to a clearer picture of what's happening in the unseen soils, the oceans, and everywhere that microbial interactions may be happening. If we understand how oxygen is changing in the microscale environment, we can make better predictions of how microbial communities survive in the lungs or in agricultural systems."

The paper is titled "The contrasting roles of nitric oxide drive microbial community organization as a function of oxygen presence." Funding was provided by the National Institutes of Health and the National Science Foundation. 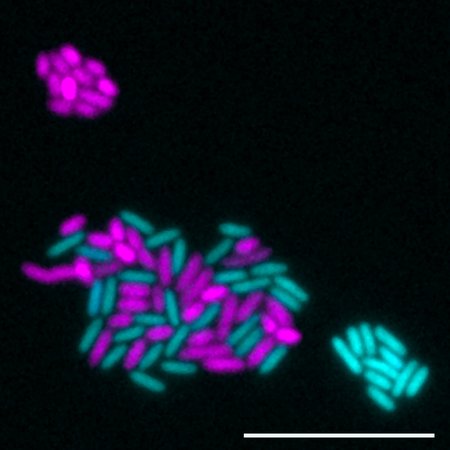 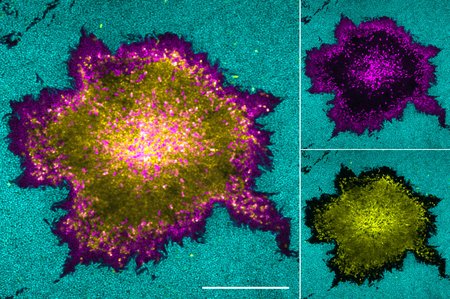