Microbial ultrastructure, HIV, and the development of electron cryotomography

The Jensen laboratory uses state-of-the-art electron cryomicroscopy techniques to understand the structure and function of large protein machines and their arrangement within cells. Projects range from theoretical studies on the mathematics of three-dimensional reconstructions to direct imaging of individual protein complexes to tomography of viruses and cells.

The "big picture" is to eventually combine our structural results with others to eventually obtain a comprehensive, predictive understanding of at least simple cells. To this end, tens of thousands of bacterial genomes are now available. All the basic metabolic pathways in several model species are known. A variety of "omic" technologies are being used in various labs to document which genes are transcribed and when, which macromolecules are synthesized and how many of each type are present in the cell, and how they interact to mediate metabolism and regulate gene expression. Considering this dramatic progress, our persistent ignorance about many of the most fundamental physical and mechanical processes that occur in a bacterial life cycle is surprising. We still don't know, for instance, how bacteria generate and maintain their characteristic shapes, establish polarity, organize their genomes, segregate their chromosomes, divide, and in some cases move. Thus in some sense the "omics" technologies are giving us lists of parts and reactions, but bacterial cells are not merely bags of enzymes - structural and mechanical details are also needed.

Such information often comes through the careful testing and revision of specific hypotheses, but it can also emerge less methodically when major technological advances open new windows into nature. The emergence of electron cryotomography is just such a case, as it is now providing unprecedented 3-D views of heterogeneous proteins, viruses, and even whole bacterial cells in near-native states to "macromolecular" (~2-5 nm) resolution. We are both helping develop electron cryotomography as a structural technique and using it to study bacterial ultrastructure, hoping to generate new insights into the structures and functions of the cytoskeleton, cell wall, genome, motility machines, intracellular compartments, chemoreceptor systems and other supramolecular assemblies.

Because for many decades cytoskeletal filaments were only rarely seen in traditional thin-section EM images of bacteria, it was long thought that prokaryotes lacked a cytoskeleton, and that this was in fact one of the hallmark differences between pro- and eu-karyotes. More recently, bacterial homologs of actin, tubulin, and intermediate filament proteins have been identified, however, and fluorescent light microscopy (fLM) has confirmed that these and other proteins localize in filament-like patterns in-vivo. Using cryotomography, we and others have now directly visualized many different cytoskeletal filaments and filament bundles in a variety of species, confirming that bacteria do indeed have elaborate and extensive cytoskeletal systems. Simply seeing these filaments for the first time raised a number of important questions: while some of the filaments appeared in locations predicted by fLM, others did not, and sometimes filaments were not seen where they were expected. We are now working to identify each filament and gain insight into its function and mechanism.

Most motile bacteria propel themselves with flagella. We published the first structure of an entire flagellar motor, which showed among other things the number and shape of the stator "studs" in-situ. We have now reconstructed motors from several different species, and the comparison is highlighting how each species has adapted the motor to its purposes. The T. primitia motor is, for example, wider in diameter and has more stator studs, adaptations that could "gear" it down to produce the higher torque it might need as a spirochete to rotate the entire cell. Non-flagellar ("gliding") motility mechanisms in bacteria have also been described. We imaged the attachment organelle of Mycoplasma pneumoniae and proposed that it was a conformationally dynamic engine driving motility in that species.

Given a means to move, bacteria must also know where to go! Bacterial chemotaxis is mediated by an array of chemoreceptors embedded in the cell membrane which sends signals to the flagellar motors. We used cryotomography to generate the first 3-D structures of chemoreceptor arrays in intact, wild-type cells, revealing that the receptors are arranged as a hexagonal lattice of "trimers of receptor dimers."

While some enzymes diffuse freely, others are tethered or packaged into hyperstructures that streamline certain metabolic pathways. We recently solved the quaternary structure of E. coli's pyruvate hydrogenase hyperstructure by cryotomography. More recently we have been analyzing the carboxysome, an organelle-like polyhedral body that facilitates carbon fixation by sequestering ribulose 1,5-bisphosphate carboxylase/oxygenase (RuBisCO). Our cryotomograms have revealed the number, size, shape, and positions of carboxysomes inside H. neapolitanus as well as their surprising association with storage granules. The number, positions, and orientations of RuBisCOs inside purified carboxysomes are also visible.

Cryotomographic studies on other aspects of microbial ultrastructure are also ongoing.

In addition to imaging small cells, we have also made a major investment into the structural biology of the human immunodeficiency virus type 1 (HIV). HIV is unusual in that while each virus has the same basic membrane and protein layers, they are all unique, making standard methods such as X-ray crystallography or EM-based "single particle analysis" ineffective. Thus while there are already hundreds of structures of individual HIV protein domains available in the PDB, many questions remain about how these assemble to form a virus and then how subsequent protein modifications drive maturation. In collaboration with Wes Sundquist's group, we have now used cryotomography to determine the three-dimensional structures of the immature and mature forms of HIV. This work confirmed previous conclusions from simpler projection images that the Gag lattice is organized into concentric spherical shells with hexagonal packing, but imaging them in 3-D allowed us to see that the shells are incomplete: the Gag lattice was actually a patchwork of loosely connected hexagonal nets separated by regions of disorder or vacancy. By computationally extracting individual unit cells from just the highly ordered patches, we produced an average structure of a Gag hexamer which suggested that the SP1 spacer formed a lattice-stabilizing six-helix bundle. This explains why proteolysis between CA and SP1 during maturation triggers rearrangement, and why certain drugs that bind SP1 block maturation. Other tomograms showed that the cone angle of the mature capsid shell does indeed match the predictions of the current "fullerene cone" model, and that some viruses had multiple and sometimes even nested capsid shells, arguing strongly against models of maturation that involve gradual collapse of a spherical immature shell.

Electron cryomicroscopy is a relatively young field, and we are working to improve sample preparation methods, the number and quality of images produced, and the algorithms used to process and analyze those images. We have, for example, described a new cryogen mixture that facilitates plunge-freezing, shown that liquid nitrogen is actually a better coolant than liquid helium, characterized the first stage for routine dual-axis tilting, automated sequential tilt-series acquisition, developed a database for the storage of tomograms, and developed a new method for denoising. 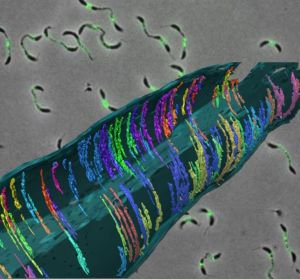 Figure 1: Segmented and colored three-dimensional reconstruction of the constricted midsection of a Caulobacter crescentus cell overexpressing a mutant form of the division protein FtsZ (colored filaments), superimposed on a much larger scale fluorescence image of a field of similar cells where FtsZ is fused to GFP. Li, Z., Trimble, M.J., Brun, Y.V., Jensen, G.J. The structure of FtsZ filaments in vivo suggests a force-generating role in cell division. EMBO J. 26:4694-4708. 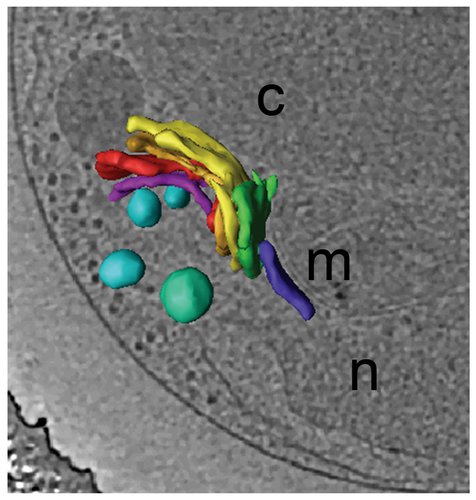 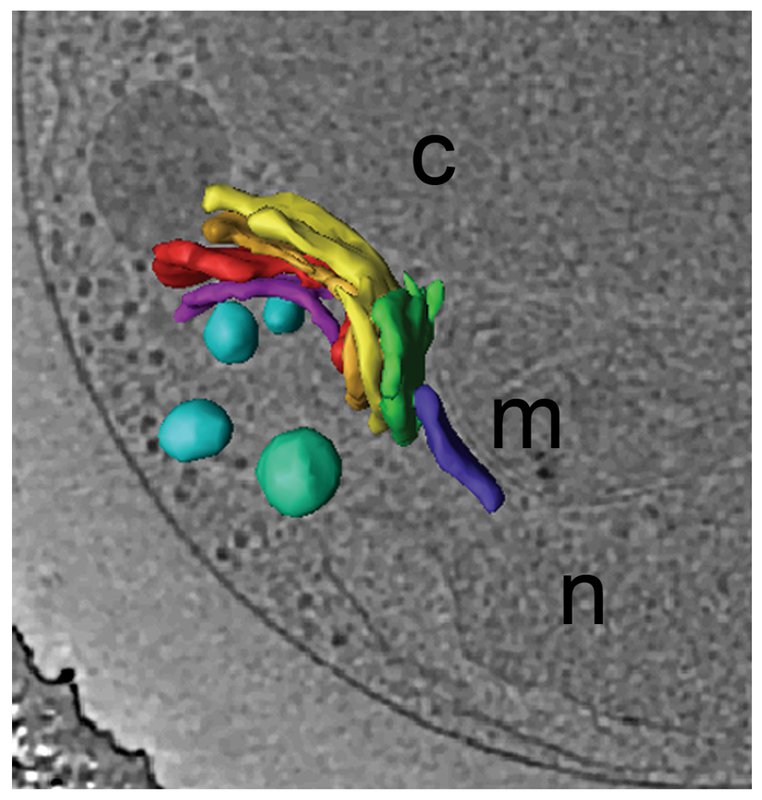 In addition to HHMI, the Jensen lab thanks the NIH, HFSP, the Beckman and Agouron Institutes, the Moore and Templeton Foundations and CEMI for support.