What do you do at different times in the day? What do you eat? How do you interact with your neighbors? These are some of the questions that biologists would love to ask communities of microbes, from those that live in extreme environments deep in the ocean to those that cause chronic infections in humans. Now, a new technique developed at Caltech can answer these questions by surveying gene expression across a population of millions of bacterial cells while still preserving the cells' positions relative to one another.

The technique can be used to understand the wide variety of microbial communities on our planet, including the microbes that live within our gut and influence our health as well as those that colonize the roots of plants and contribute to soil health, to name a few.

The technique was developed at Caltech by Daniel Dar, a former postdoctoral scholar in the laboratory of Dianne Newman, Gordon M. Binder/Amgen Professor of Biology and Geobiology and executive officer for biology and biological engineering, and by Dr. Nina Dar, a former senior research technician in the laboratory of Long Cai, professor of biology and biological engineering. Daniel Dar is now an assistant professor at the Weizmann Institute of Science in Israel. A paper describing the research appears on August 12 in the journal Science.

We cannot ask a bacterium what it is doing or how it is feeling, but we can look at the genes it is expressing. Gene expression is the basis of any behaviors or actions a microbe can take. For example, if there is a lack of food in a bacterium's environment, the microbe can turn on a set of genes that will help it to conserve energy and dial back less necessary genes, such as those that are involved in reproduction. Though two bacteria in the same species can have the same genetic information, genes can be turned on and off in different situations, resulting in different behaviors at the individual bacterium level.

"Traditional methods for measuring gene expression tend to minimize an entire population, in all of its complexity and three-dimensional organization, into a single number," says Daniel Dar. "Imagine taking a tray of fruits with unique colors, flavors, and scents and having to blend them all together into a single smoothie. All identity is lost. The meaning of this technological limitation for microbiological research, both in medicine and environmental sciences, is that biological signatures that manifest at the microscale—the scale at which microorganisms make their living—remain mostly invisible. This was a major motivation for us along this collaborative study: building on the revolutionary technology first developed in the Cai lab to expose the complexity of microbial populations in a fundamentally new way."

The new technique, dubbed par-seqFISH (for parallel and sequential fluorescence in situ hybridization), can track these differences in gene expression with high precision. In this study, par-seqFISH was used to examine gene expression in populations of Pseudomonas aeruginosa, a pathogen that often causes infections (such as those found in the lungs of people with cystic fibrosis or within chronic skin wounds) and is studied extensively in the Newman laboratory. par-seqFISH can be used on virtually any species of bacteria whose genomes have been sequenced and on communities of microbes composed of different species.

par-seqFISH is precise to the sub-micrometer level and is able to show differences in gene expression even within individual cells. For example, the team found that certain genes can be expressed more at the poles of a cell rather than near the center. The technique preserves the spatial organization of bacteria, or their positions relative to one another. Because of its level of precision, it revealed significant diversity in the gene expression and resulting activity of individual members of a population of the same species of bacteria.

The method's ability to image at this level of detail makes it a powerful technique for cellular biology research.

"We saw patterns where certain genes were being expressed spatiotemporally—in space and in time—in ways that we would have never been able to predict, which suggested new ideas about how the population functions as a whole," says Newman. "The heterogeneity of bacterial populations and communities at spatial scales on the order of a few micrometers is incredibly important and underappreciated. The profound thing that this technique hammers home is that context matters. Every cell is experiencing a slightly different microenvironment; for example, how much oxygen is around a given cell indicates what kind of metabolism that cell will engage in. Appreciating the full extent of such heterogeneities is necessary if we are to be able to manipulate these communities, such as being able to treat chronic bacterial infections. Understanding what all the members of the population are doing will help guide more effective therapeutic strategies."

seqFISH, the precursor technique to par-seqFISH, was pioneered in the Cai laboratory.

"Every time we look at a biological system with both spatial context and genomics information, we find interesting new biology," says Cai. "Microbial communities, with their rich diversity, show us again how beautiful and complex biology is when looked through the lens of spatial genomics."

Newman, who is the lead and faculty supervisor for the Ecology and Biosphere Engineering initiative at Caltech's Resnick Sustainability Institute (RSI), envisions that the technology will be available to researchers across Caltech to utilize through RSI, assisting studies of microbes in diverse environments, from the soil around plant roots (called the rhizosphere) to deep-sea sediments.

The paper is titled "Spatial transcriptomics of planktonic and sessile bacterial populations at single-cell resolution." Daniel Dar, Nina Dar, Cai, and Newman are the study's authors. Funding was provided by the National Institutes of Health, the Army Research Office, the Allen Frontiers Group, the Rothschild Foundation, European Molecular Biology Organization, the Helen Hay Whitney Postdoctoral Fellowship, and the Division of Geological and Planetary Sciences at Caltech. Cai is an affiliated faculty member with the Tianqiao and Chrissy Chen Institute for Neuroscience at Caltech. 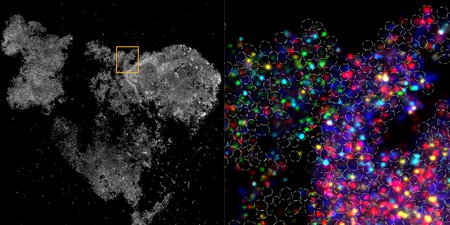 Left: A black-and-white image of a biofilm. Right: A closeup of a portion of this biofilm with individual cells circled and colors corresponding to the expression of particular genes. Credit: Courtesy of the Newman laboratory
Image Lightbox
Subscribe
The Caltech Weekly