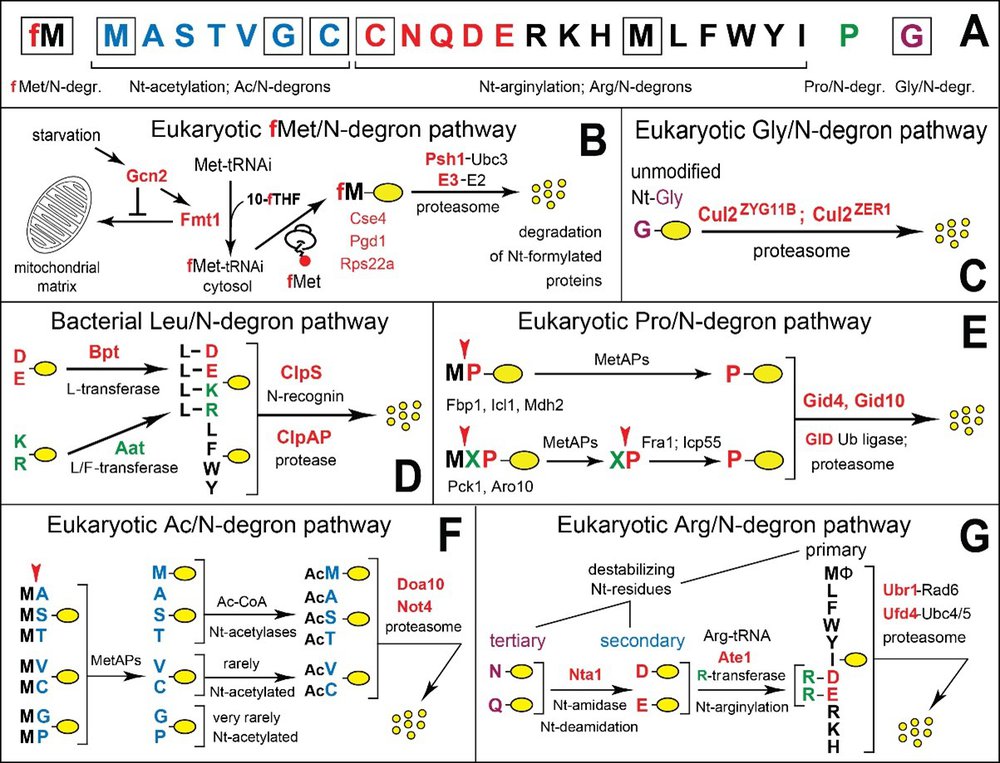 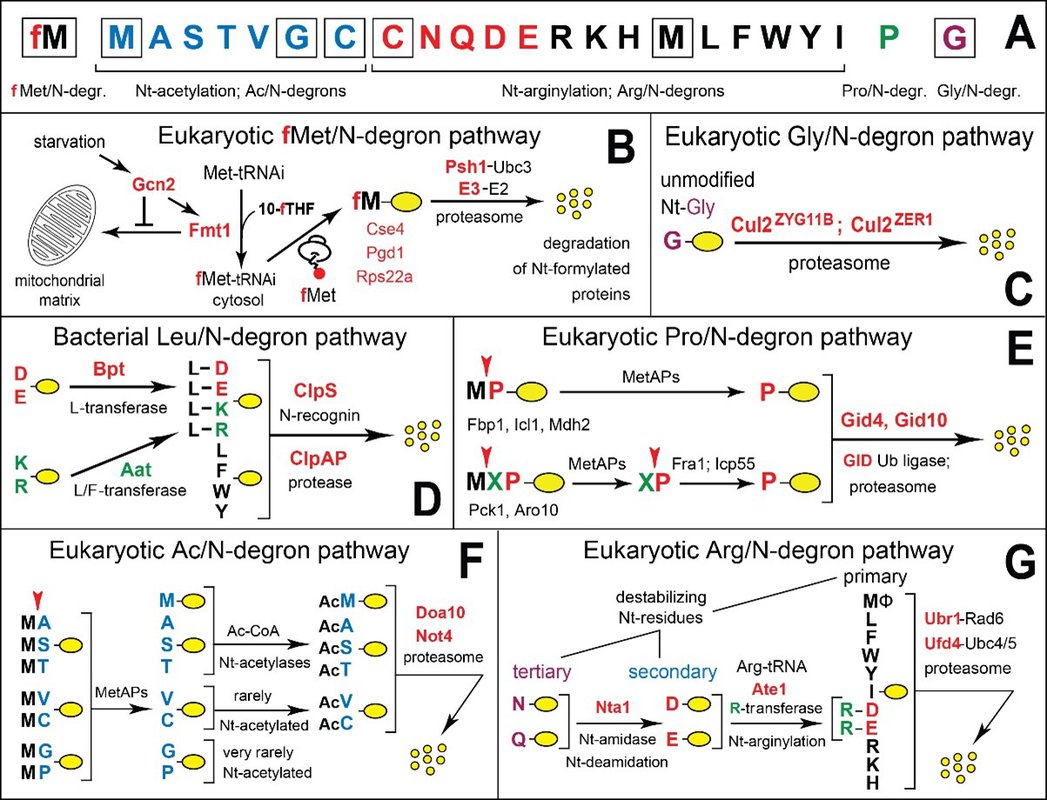 Figure 2. The mammalian Arg/N-degron pathway. This pathway targets proteins either for proteasome-mediated degradation (via UBR1, UBR2, UBR4, UBR5 E3 N-recognins) or lysosome-mediated degradation (via p62 N-recognin). The cited E3 ubiquitin (Ub) ligases of this pathway can recognize not only the indicated (destabilizing) Nt-residues but also specific non‑N‑terminal degrons in proteins that lack Arg/N-degrons. C* denotes oxidized N-terminal Cys, either Cys‑sulfinate or Cys-sulfonate. ATE1 Arg-tRNA-protein transferase (R-transferase) conjugates Arg to Nt-Asp, Nt-Glu or (oxidized) Nt-Cys. Hemin (Fe3+-heme) inhibits the enzymatic activity of R‑transferase and accelerates its degradation in vivo. Hemin also binds to UBR1/UBR2 and modulates specific aspects of their activity. Type 1 and type 2 refer, respectively, to two sets of primary destabilizing Nt-residues, basic (Arg, Lys, His) and bulky hydrophobic (Leu, Phe, Trp, Tyr, Ile, and also Met, if the latter is followed by a bulky hydrophobic residue (Ф)). Five enzymes of the mammalian Arg/N-degron pathway form a targeting complex, which apparently includes the 26S proteasome as well. For details, see 2019-2021 papers cited below (in the list of selected papers from 2000 to present).

Lab's Studies of the Ubiquitin System

We are interested in just about everything. But the brevity of life being what it is compels selectivity. Hence our main subject – the ubiquitin system – chosen partly through a strong preference and partly by accident.

The field of ubiquitin (Ub) and regulated protein degradation was created in the 1980s, largely through complementary discoveries by the laboratory of A. Hershko (Technion, Haifa, Israel) and by my laboratory, then at MIT. These discoveries, during the 1980s, revealed three sets of previously unknown facts:

1) That the previously known ATP-dependent degradation of proteins in extracts from rabbit reticulocytes involves a new protein modification, the covalent conjugation of Ub, a 76-residue protein, to other proteins in these extracts, including proteins added to an extract. Ub-protein conjugation was shown to be mediated by specific enzymes, termed E1, E2 and E3. These studies were carried out using in vitro (cell-free) systems and purified or partially purified E1-E3 enzymes.

2) That the selectivity of ubiquitin conjugation to other proteins is determined by the presence of specific degradation signals (degrons) in cellular proteins, including N-terminal (Nt) degrons, which were the first to be discovered (in 1986) and are called N-degrons. The main determinant of an N-degron in a protein is its destabilizing Nt-residue. Ub-dependent proteolytic systems that target proteins bearing specific N-degrons are called N-degron pathways. (Until 2019, these systems were called "N-end rule pathways".) See Figures 1 and 2, and also 2019‑2021 papers cited below, in the list of selected papers from 2000 to present.

3) That ubiquitylation of proteins has a strikingly broad range of biological functions, largely through control, via processive proteolysis, of the in vivo levels of most cellular proteins, and also through pathways that involve Ub but do not involve proteolysis. Specifically, during the 1980s my lab has shown, using genetic and biochemical methods, that Ub conjugation is necessary for the bulk of protein degradation in vivo (in living cells). In addition to discovering the first degrons in short-lived proteins (item 2 above), we also discovered the first specific functions of ubiquitylation: in DNA repair (1987); in the cell cycle (1988); in stress responses (1987); in protein synthesis (1989); and in transcriptional regulation (1990). We also identified the first physiological substrate of the Ub system (MATalpha2 transcriptional repressor) (1990); cloned the first genes encoding Ub precursors (1984-1989); identified the first Ub-conjugating (E2) enzymes with specific biological functions (RAD6, in DNA repair, and CDC34, in the cell cycle (1987-1988)); identified as well as cloned the first specific E3 Ub ligase, termed UBR1 (1990); and also cloned the first deubiquitylating enzymes, termed UBP1-UBP3. The cloning, in 1990, of the first specific E3 Ub ligase opened up a particularly vast field, as later studies showed that the human genome encodes at least 800 E3 Ub ligases. This enormous diversity of E3s, which recognize distinct degrons in their protein targets, underlies the immense functional reach of the Ub system. In addition, we discovered the first specific poly-Ub chains (in 1989), identified their topology (isopeptide bonds between Gly76 and Lys48 of adjacent Ub moieties), and demonstrated the necessity of these substrate-linked poly-Ub chains for the proteasome-mediated proteolysis. We also discovered that the Ub system is capable of subunit selectivity, i.e., it can destroy a specific subunit of oligomeric protein, leaving the rest of the protein intact and thereby making possible protein remodeling. This fundamental process underlies essential aspects of the cell cycle (selective replacement of cyclin subunits in cell-cycle kinases), the activation of transcription factors such as, e.g., NF-kappaB, and a multitude of other processes. Together, the insights described in items 2 and 3 comprised the discovery of degrons and biological fundamentals of the Ub system.

These complementary insights by Hershko's and my laboratories led to enormous expansion of the Ub field in the 1990s and afterward. This field is now one of the largest arenas in biomedical science, the point of convergence of many disparate disciplines.

The discoveries during the 1980s (items 1-3) yielded the modern paradigm of the central importance of regulated proteolysis for the control of the levels of specific proteins in vivo, as distinguished from their control by transcription and protein synthesis. In sum, these advances revealed that the control through regulated protein degradation rivals, and often surpasses in significance the classical regulation through transcription and translation. This radically changed understanding of the design of biological circuits has major ramifications for medicine, given the vast functional range of the Ub system and the multitude of ways in which Ub-dependent processes can malfunction in disease or in the course of aging, from cancer and neurodegenerative syndromes to perturbations of immunity and many other illnesses, including birth defects.

Papers about early history of the ubiquitin field:

My laboratory continues to study the Ub system, with an emphasis on N-degron pathways of protein degradation (they were previously called "N-end rule pathways"), which we analyze in the mouse, in the yeast Saccharomyces cerevisiae, and in bacteria. Although bacteria lack the bona fide Ub system, at least one (Ub-independent) N-degron pathway, termed the Leu/N‑degron pathway, is present in them as well.

In 2012 (Protein Science, 21:1634-1661), and also later, in 2019 (PNAS 116, 10773–10782), I proposed that if there's a specific molecular cause of sleep, it might stem from production, during wakefulness, of numerous intracellular and extracellular protein fragments that can be transiently beneficial but can also perturb, through their cumulative and mechanistically diverse effects, the functioning of the brain and other organs. A part of the fragment generation (FG) hypothesis is the suggestion that some natural protein fragments are removed too slowly during wakefulness, and that the resulting accumulation of fragments gradually impairs cognition and other processes. In sum, the FG hypothesis posits that sleep evolved, at least in part, to counteract overproduction (owing to insufficiently fast elimination) of hundreds of different protein fragments that may accumulate, at low fractional levels, in the brain and other sleep‑relevant organs (such as the skeletal muscle) by the time sleep begins. Our studies in this arena focus on verification of the FG hypothesis.

Our studies in 1978-1981 produced two sets of advances outside the ubiquitin field. One of them was the discovery, in 1978-1979, of the first nucleosome-depleted, nuclease-hypersensitive regions in chromosomes (Varshavsky et al. (1978) SV40 minichromosome: preferential exposure of the origin of replication. Nucl. Acids Res. 5, 3469-3478. Varshavsky et al. (1979) A 400 bp stretch of SV40 viral DNA that includes the origin of replication is exposed in minichromosomes. Cell 16, 453-466). Such regions are characteristic, in particular, of transcriptional promoters, recombinational hotspots, and the origins of DNA replication. This arena continues to be an active field of chromosome studies.

The other advance outside the ubiquitin field was the discovery and dissection, in 1980-1981, of the first pathway of chromosome cohesion/segregation (Sundin & Varshavsky (1980) Terminal stages of SV40 DNA replication proceed via multiply intertwined catenated dimers. Cell 21, 103-114. Sundin & Varshavsky (1981) Arrest of segregation leads to accumulation of highly intertwined catenated dimers: dissection of the final stages of SV40 DNA replication. Cell 25, 659-669). This chromosome cohesion/segregation pathway involves the formation, during replication, of multiply intertwined (multicatenated) sister chromatids, and their subsequent regulated separation, through stepwise decatenation, by topo-II isomerases.

Besides Ub studies and other projects described above, the lab invented, over the years, a number of biochemical and genetic methods. These techniques (2-D mapping of DNA replication intermediates [1,2]; 2-D hybridization mapping of nucleosomes [3]; Ub fusion technique [4,5]; chromatin immunoprecipitation (ChIP) assay [6]; hypersensitivity to heavy water as a generally applicable conditional phenotype [7]; heat-activated degron [8]; split-Ub method for detecting protein interactions [9]; Ub translocation assay [10]; Ub reference technique [11]; Ub sandwich technique [12]; subunit decoy method [13]; and promoter reference technique (PRT) [14]) often stemmed from our efforts to advance research projects in the lab. Most of these techniques continue to be in use, and some of the cited methods remain uniquely important in their areas of application.

References to section about new methods:

Appended below is the list of selected papers by the lab over the last 21 years, from 2000 to present. It illustrates advances, including recent ones, in understanding N-degron pathways and other aspects of the Ub system.

Full list of papers (235 total) is in the "Publications" part of this page.