Gene silencing via the RNA interference (RNAi) pathway is an evolutionary conserved process that is critical for the control of gene expression in organisms ranging from yeast to humans. Targets of RNAi are recognized through complementary base-pairing interactions with small RNAs that act as guides to RNAi effector complexes. Several distinct classes of endogenous small RNAs, including microRNAs, endo-siRNAs and piRNAs, regulate gene expression states to impact diverse biological processes. Our lab focuses on understanding the nature and biological functions of small RNA pathways in animals. We have identified and characterized an evolutionary conserved small RNA pathway that operates in germ cells and that is critical both for germline stem cell maintenance and for gametogenesis. Working in Drosophila and mice, we discovered a new class of small RNAs, Piwi-interacting (pi)RNAs. Piwi/piRNA pathway plays an important role in genome integrity by repressing selfish repetitive elements. A characterization of piRNA sequences in combination with genetic studies revealed that the biogenesis and function of piRNAs differs from that of other classes of small RNAs. While canonical small RNAs, such as microRNAs, affect gene expression post-transcriptionally, our studies suggest that piRNAs most likely serve as guides for de novo DNA methylation in mouse male germ cells. 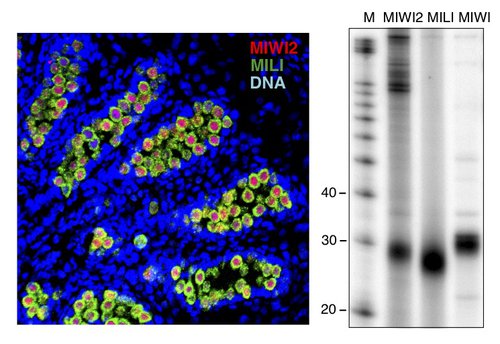 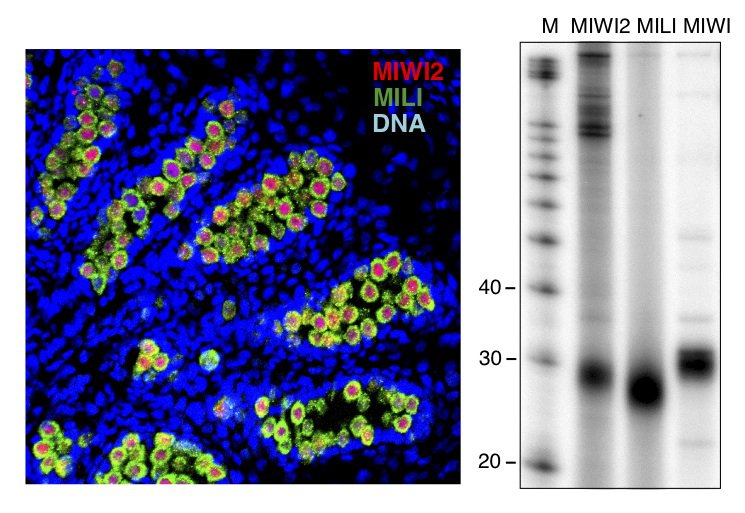 We are interested in two general questions: biogenesis and function of small non-coding RNAs.

Processing of piRNAs differs from that of other known classes of small RNAs. It was shown piRNA are produced independently of Dicer, the nuclease that generates siRNAs and microRNAs from double-stranded substrates; however, the proteins that are responsible for producing piRNAs are only partially understood.

Our investigations of piRNA biogenesis led us to the ping-pong model that proposes amplification of piRNAs in a cycle that depends on the nuclease activity of Piwi proteins themselves. One of the central mysteries of repeat silencing in both mammals and flies is how repeats are distinguished from genes and selectively silenced. We are investigating the nature of the determinants that make a particular sequence a target of the Piwi pathway. We are using biochemical purification of Piwi-piRNA complexes and genetic approaches to identify proteins involved in piRNA biogenesis.

We showed that the piRNA pathway is linked to de novo DNA methylation in the mouse germline. One of the three murine Piwi proteins is specifically found in germ cell nuclei during the critical window when de novo methylation patterns are established. We also showed that Piwi proteins at that developmental timepoint are associated with piRNAs that target several classes of transposable elements. The same transposons are de-repressed and their genomic sequences lose methylation in Piwi-deficient mice. The discovery that piRNAs may guide DNA methylation in germ cells is an important finding for several reasons. First, it provides a new paradigm for how small RNAs can affect gene expression. Second, it explains how a subset of sequences are tagged for de novo methylation. How methylation sites are defined remains a central mystery of epigenetics. An important goal of my lab is to define the pathway by which piRNAs guide de novo DNA methylation. We also study whether the piRNA pathway can be re-programmed to new targets and can be used to manipulate DNA methylation patterns in somatic cells.

It is clear that germ cells, somatic stem cells and probably cancer stem cells possess unique pathways for small RNA-mediated silencing. Our long-term goal is to understand how diverse RNA silencing mechanisms are integrated with other pathways in context of development and pathology. Eventually, the knowledge gained from the investigation of silencing mechanisms in stem and germ cells will help us to understand the unique biology of these cells and will impact our general understanding of gene regulation and how it is altered in disease.