To gain a comprehensive and dynamic understanding of embryonic development is a formidable challenge, as hundreds of genes function at any particular moment to effect developmental change. To assay progression of developmental events, we develop and employ novel technologies for making temporally relevant observations using a combined approach of imaging, computation, and molecular biology. In particular, we have focused significant efforts towards development of technology and methodology to support quantitative data acquisition ('in vivo phenotyping'), which lends to more clear comparison of wildtype and mutant phenotype.

Two goals of our research program are to better understand (i) the cis-regulatory mechanisms by which spatial and temporal gene expression is controlled and (ii) how signaling pathways function to control differentiation and to regulate cell movements. We use large-scale whole genome observations to reveal the genes and cis-regulatory modules (CRMs) that comprise these networks and defined experiments to understand how they come together to control cellular behaviors within the Drosophila melanogaster model system. Most of our studies have focused on early embryonic development up to and including gastrulation, as large gene expression changes and strong cell movements are required to turn the totipotent blastula into a multi-layered embryo of distinct cell types. In addition, recent efforts have extended our focus to the cis-regulatory and signaling mechanisms guiding development of specialized tissues, in the wing and female germline.

Through our studies, we strive to understand the underlying logic of cis-regulatory control of gene expression, how gene regulatory network structure can influence patterning/differentiation/signaling, and how cellular behaviors are organized during collective cell movements. These are inter-related problems that are relevant for the development of all animals, and as such have far reaching implications.

We can describe in a model, a network diagram, how ~60 genes interact during gastrulation to specify dorsal-ventral patterning and subsequently to control differentiation of cells in Drosophila. Even after such an extensive analysis, it remained unclear how the transcription factor Dorsal can regulate the expression of genes in a broad lateral domain. We have conducted an analysis of the cis-regulatory sequences supporting expression in the broad lateral domain of embryos, and found evidence that cooperation between Dorsal and a ubiquitous activator is required for this threshold response, sensitive to the lowest levels of the Dorsal transcriptional activator (Liberman and Stathopoulos, Dev. Biol., 2009). Our approach combined evolutionary analysis, site-directed mutagenesis, and synthetic construct design to support this model. Furthermore, we provide evidence for flexibility in the composition and organization of sites required to support expression within this domain.

One of the most striking properties of some developing systems is the ability to re-organize their developmental program and apparently give rise to normal adults when the size or shape of the embryo is altered. Therefore we are investigating how patterns are retained/altered in various genetic backgrounds. Our published work shows that Dorsal transcription factor levels are dynamic and changing (Liberman et al. PNAS 2009), and most recently we showed that gene expression along the dorsal-ventral axis can reflect these dynamics as well (Reeves,et al. 2012)

We are also currently using genetic and computational approaches to understand how patterning is controlled by morphogen gradients at later stages of development. In the wing disc of Drosophila larvae, we have found evidence that patterning is supported by an overshoot and subsequent refinement of the Hedgehog gradient, which results from a negative feedback loop inherent in the gene regulatory network (Nahmad and Stathopoulos, PLoS Biol., 2009). We are interested in understanding this problem at the cis-regulatory level.

Another new area in the lab is the study of cis-regulatory modules in native context (Dunipace et al., Development 2012). We are testing the idea that cis-regulatory modules interact, molecularly, to support gene expression. To test this idea, we are studying regulation of genes expressed in the early Drosophila embryo. From our in vivo studies of Twist transcription factor occupancy to DNA (Ozdemir et al., Genome Research 2011), it was determined that multiple CRMs are active at the same stage of development. We are testing the idea that interaction between co-active enhancers is required for gene expression, for instance to control levels of expression. 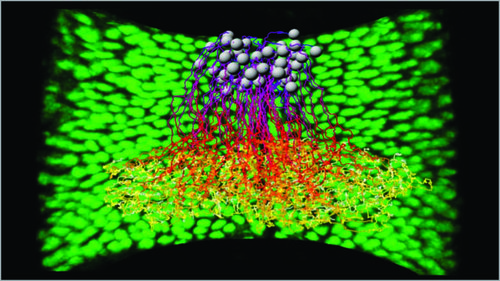 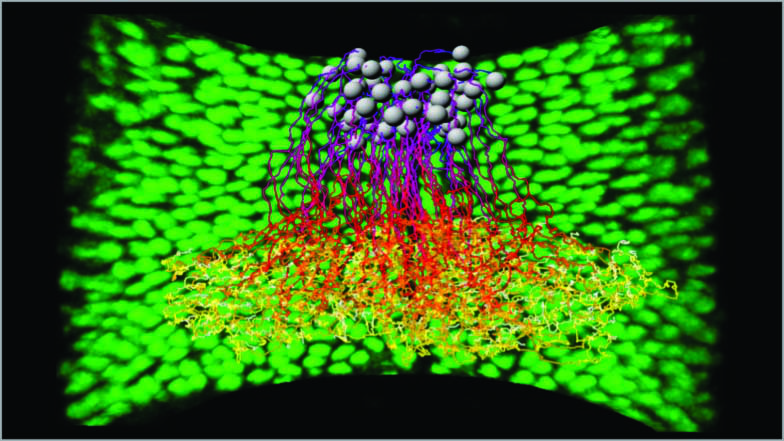 The function of many genes differentially expressed along the dorsal-ventral axis of Drosophila embryos is to coordinate the cell movements that are driving gastrulation. We are analyzing the mechanism by which mesoderm spreading is accomplished. With technical advances in imaging and novel quantitative analyses, we have shown that mesoderm migration is a directed process; that cells move from ventral-most to dorsal-most regions of the ectoderm in a coordinate fashion (McMahon et al., Science, 2008). High-level spatial organization within the moving population of cells was visualized. We aim to determine whether such spatial organization is required for collective cell migration in general, a process that makes essential contributions to embryonic development.

Our work has suggested that FGF signaling is important for collective cell mesoderm migration during gastrulation, but that it is not absolutely required for movement. Instead, in the absence of FGF signaling, those cells in contact with the ectoderm are competent to migrate in a directional manner; those that cannot contact the ectoderm exhibit random movements, and lose the ability to move directionally. FGF ligands support distinct and overlapping roles in support of cell migration (McMahon et al., Dev 2010). Thisbe supports collapse of the invaginated tube, while both ligands support monolayer formation. We are studying whether these ligands differ in their range of action. We have found that both ligands are cleaved (Tulin and Stathopoulos, BMC Dev Biol 2010), and how this impacts activity is currently being investigated. As FGF mutants share similarity with phenotypes exhibited by cell adhesion mutants, we are investigating whether a link between FGF signaling and cell adhesion supports cell movement.

We have also developed caudal visceral mesoderm (CVM) migration as a novel system to study the coordinated movement of groups of cells (Kadam et al., Development 2012). Using live in vivo imaging and quantitative analyses, we plan to investigate how groups of cells coordinate movement. CVM migration is the longest migration in all of Drosophila embryogenesis and yet surprisingly little is known about this process, which supports proper gut development.