Director of the Tianqiao and Chrissy Chen Brain-Machine Interface Center

While the concept of artificial intelligence has received a great deal of attention in the popular press, actual determination of the neural basis of intelligence and behavior has proven to be a very difficult problem for neuroscientists. Our behaviors are dictated by our intentions, but we have only recently begun to understand how the brain forms intentions to act. The posterior parietal cortex is situated between the sensory and the movement regions of the cerebral cortex and serves as a bridge from sensation to action. We have found that an anatomical map of intentions exists within this area, with one part devoted to planning eye movements and another part to planning arm movements. The action plans in the arm movement area exist in a cognitive form, specifying the goal of the intended movement rather than particular signals to various muscle groups. Current studies involve examining decision making, stages in motor planning, and coordinate transformations for sensory-guided movements.

We are using our basic science findings to develop a cognitive-based neural prosthesis for paralyzed patients. This prosthetic system is designed to record the electrical activity of nerve cells in the posterior parietal cortex of paralyzed patients, interpret the patients' intentions from these neural signals using computer algorithms, and convert the "decoded" intentions into electrical control signals to operate external devices such as robot limbs for activities of daily living or a computer for communications. We are also examining how electrical stimulation of somatosensory cortex can assist in the fine dexterous control of a robotic limb. Our lab is beginning efforts to transition this animal research to clinical trials in paralyzed patients.

Reversible in-activation of areas of the posterior parietal cortex that represent movement intentions produce deficits in movement decisions. Collecting fMRI data during the period of inactivation, we find reduced activation across cortical circuits for movement planning in the parietal and frontal lobes within the affected hemisphere. Interestingly, on those few trials in which the animals overcome the deficit, there is an over-activation of the parietal-frontal circuits in both hemispheres. We are now exploring how artificial brain stimulation may be used to mimic this pattern of compensatory activity to "repair" these temporary deficits. The results of these experiments may be used for designing brain stimulation devices for rehabilitation from stroke and traumatic brain injury. 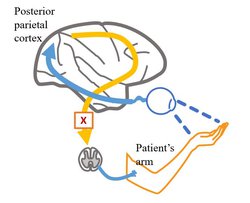 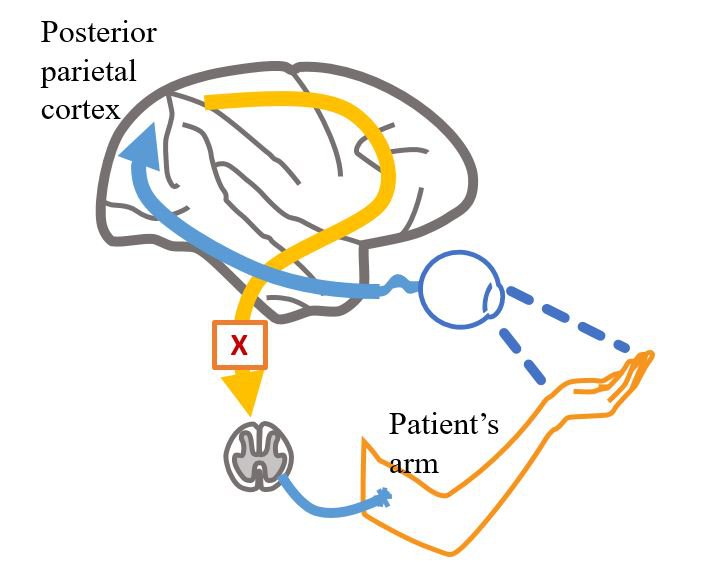 Neural activity recorded from parietal visual-motor cortex can be used to interpret intentions in order to assist patients with paralysis. This figure depicts paralysis from spinal cord injury.